The horse names below are "girl" names for mares or fillies, or are gender neutral.

Each name is accompanied by a meaning, description, or a bit of history or trivia about that name.

Arabella - In Latin, the name "Ara" means "altar." The name "Bella" is Italian and/or Latin in origin and means "beautiful." The name "Arabella," then, can be considered to mean "beautiful altar" but is often defined as meaning "prayerful." Regardless of its exact meaning, it is simply a beautiful name.

In history, Arabella was one of two spiders (the other one being named Anita) that were part of early NASA experiments, spinning webs while weightless in space during the Skylab project in 1973.

Argo - In Greek, Argo means "swift." In Greek mythology Argo was the name of the ship that Jason and the Argonauts sailed in to search for the Golden Fleece. In the television series "Xena, Warrior Princess" (1995 - 2001) Argo was the name of Xena's palomino mare. Xena's Argo was faithful, intelligent, and brave in battle.

Arwen - Arwen (the female counterpart of the male name Arwyn, with a "y") is a beautiful Welsh name that means "noble maiden." It is perhaps best known as a fictional character in J.R.R. Tolkien's novel, "The Lord of the Rings."

From eBay. Names continue below.

Below: This mare is named Strawberry, a pretty, descriptive name for a red roan horse of either gender. 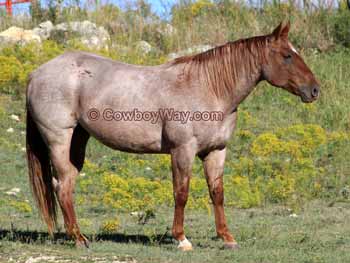 Bella- The name "Bella" is Italian and/or Latin in origin and means "beautiful." A very pretty name that is easy to say, easy to remember, and has a lovely sound to it. The name is well known as one of the leading characters in the "Twilight" series of books and subsequent movies.

Boomerang - Boomerang was a famous Irish Sport Horse born in 1966 in Ireland. It's a charming name for any horse, male or female.

Calamity - The word calamity means "great misfortune" or "disaster." This would be a cute name for a horse that has lived through a rough time, or for a horse that has a bit of a wild side. The name is often associated with Calamity Jane (birth name Martha Jane Canary, 1852 – 1903) who was known both for her rough, adventurous life as well as for her generosity and kindness.

Carbine - A carbine is similar to a rifle but is lighter and shorter, making them popular for use in tight areas and on horseback. Carbine was also a famous racehorse (1885–1914) and sire who was inducted into the New Zealand Racing Hall of Fame and the Australian Racing Hall of Fame. As a name, Carbine has a powerful, old-west feel to it, perhaps perfect for a small mare with a big personality.

Cher Ami - Means "dear friend" in French. In World War I there was a famous homing pigeon named Cher Ami that delivered messages for the United States Army Signal Corps. On her last mission she was struck by enemy fire and severely wounded but still managed to deliver a message that led to the rescue of 194 men trapped behind enemy lines. Army medics saved Cher Ami's life, but one leg had to be replaced with a wooden one.

Cher Ami was awarded numerous honors for her service, and upon her death was taxidermied for her final resting place in the Smithsonian Institution. Up until she was taxidermied Cher Ami was thought to have been a male, but during the taxidermy procedure was discovered to actually be female. If your horse is brave and selfless Cher Ami may be the perfect name.

Cinch - From the Spanish word "cincha." A cinch is a saddle girth, the strap under the horse's belly that helps hold the saddle on. The word "cinch" can also be a casual or slang expression meaning something that's easy to do, as in "Oh, that's a cinch." As a name Cinch is short, pleasant and easy to say, and suitable for either gender.

Below: This gray mare is Lizzie, named for Lizzie Johnson (1840-1924), a pioneering Texas woman known for her excellent business sense and independent nature. Lizzie (the woman) is thought by some to be the first woman to accompany her own cattle on a drive up the Chisholm Trail. Digby - A simple, cute, fun name. Perfect for a fun-loving horse with an outgoing personality, male or female.

Dinah - Of Hebrew origin, Dinah means "judged" or "justified." It is a short, simple, and pretty name. In literature, it is the name of the pet cat belonging to Alice in the classic "Alice In Wonderland" book by Lewis Carroll.

Elvira - This name is generally considered to be Latin for "truth" but some sources claim it is Spanish where it means "all true." Either way, it's a very pretty name.

Elsa - A beautiful name best known for being the name of the lioness in the 1960 book by Joy Adamson, "Born Free: A Lioness Of Two Worlds." The highly successful book told the story of how Joy and her husband George raised the orphaned Elsa and then returned her to the wild. If you have a beautiful mare with a touch of wild in her heart, consider Elsa.

Frances - Frances (the female counterpart of the male name Francis, with an "i") is of Latin origin and means "French." The name was more popular years ago than it is now, so today it has a charming, somewhat nostalgic feel to it.

Below: This Paint mare is War Pony. She has a sweet nature, but can be aggressive and all-business in the pasture or when there is a job to be done. Isabel - Isabel is a beautiful name of Spanish or other origins. It is also very pleasing when shortened to "Izzy" as a nickname.

Jingles - The word "jingle" is probably most closely associated with the sound a bell makes, or the sound of spurs. There's also an expression in the ranching world: "Jingle the horses" which means to gather them and bring them in. As a name, Jingles has an upbeat, cheerful feel to it and is suitable for a male or female.

Kaspar - The name of the black, three foot high wooden cat sculpture at the Savoy Hotel in London that is assigned to eat with any group of diners that have 13 (traditionally believed to be an unlucky number) in their party. It is Kaspar's duty to bring the number of any dining party from 13 to 14, thereby protecting the diners from an unlucky fate. If your mare or filly has ever protected you or brought you luck, consider the name Kaspar.

Latigo - A latigo is the strap that is laced through the front cinch to secure a saddle to a horse. The word "latigo" also has a broader meaning, and refers to a type of leather. As a surname, Latigo is found throughout the world, including the United States, although it is not common.

As a first name Latigo is occasionally heard as a name for both people and horses, and was used as the name of a comic strip set in the Old West that ran from 1979 to 1983. In people, Latigo is usually considered to be a male name, but for horses it can be used for a male or female.

Merry - A name of Old English origin, Merry means "joyful" or "lighthearted" and probably first originated as a nickname for a person that had a happy disposition. It is well known as the name of one of the Hobbits in J.R.R. Tolkien's fictional novel "The Lord of the Rings." Merry is often considered to be the most intelligent and perceptive of the Hobbits. While the Hobbit Merry was male, the name is also well suited for females.

Below: This gray mare is named Peaceful for a horse in the 1950 movie "Fancy Pants" with Bob Hope and Lucille Ball. In the movie Peaceful is the bucking palomino Bob Hope chooses because the horse's name sounds, well...so peaceful. But Peaceful actually got his name for all the people he had tried to lay to rest. Tabitha - From the Bible, and the television show "Bewitched" (1964 - 1972). In the New Testament Tabitha was an elderly lady known for doing good and helping the poor. When she died, Peter (aka Simon Peter, better known today as St. Peter), restored her back to life. On the television show "Bewitched" Tabitha was the daughter of Samantha, a good natured witch, and her mortal husband Darin.

Willow - A simple, pleasant sounding name. Willow trees are known for their ability to bend with a strong force instead of breaking.

Yogi - The name of Yogi Berra, a famous baseball player, and of Yogi Bear, a cartoon bear. A short, cute, name.

Zelda - Zelda is a short, cute name that, as a German name, was originally a shortened version of the name Griselda (which means "dark battle"). It is also a Yiddish name that means "luck."