What Are 5 Of The Biggest Wild West Robberies?

The Wild West was a place of excitement and thrills, as cowboys ruled the land. From banks to trains, here are some of the biggest Wild West robberies to go down in history.

The Wild West was home to some of the notorious outlaws in America. From Butch Cassidy to Jesse James these bandits committed some of the most daring robberies.

Though many people think that bank robberies were common in the Wild West, they were actually relatively uncommon. Most robberies that took place were of trains and stagecoaches. Contrary to what Hollywood has portrayed in movies, outlaws were not known to jump onto trains from horseback.

Here are five of the biggest Wild West robberies that created some of the most iconic figures of the Old West.

Easily one of the most recognizable outlaws, Jesse James left a legacy as a robber and gang member. One of his most memorable moments was when he robbed a train in Iowa. 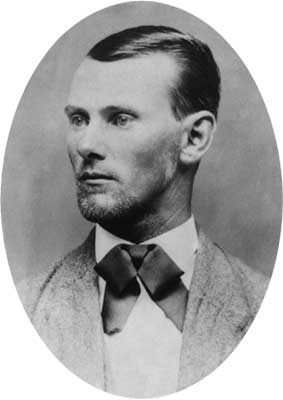 On July 21, 1873, James and his crew loosened a section of a train near Adrian, Iowa. During the heist, the thieves used a rope to dislodge the track on a blind curve. This sent the train on the Chicago, Rock Island and Pacific Railway to derail and topple over into a nearby ditch.

The engineer was killed and other passengers were injured, as the rest of the train was thrust to a stop. Jesse and his brother Frank, covered in white masks, boarded the train cars in search of a safe from the U.S. Express Company that was believed to hold a stockpile of gold.

However, James and his crew were disappointed to find the safe only held $2,000. Despite the disappointment, this robbery was still bold and led to the rise of James’ fame.

Butch Cassidy (whose real name was Robert LeRoy Parker) was well-known for his many bank and train robberies, as well as being the leader of a gang of criminals called the Wild Bunch. In addition to his life of crime, Cassidy’s horsemanship skills were legendary, as he used to race horses, raking in many wins.

Below: An 1894 mug shot of legendary outlaw Butch Cassidy. Warner pulled a gun on the bank teller, threatening to shoot him, while Cassidy loaded a bag full of money. The pair got a way with $20,750, which today would be worth over half a million dollars.

This robbery launched Cassidy into his fame as an outlaw. Shortly after this robbery, the Wild Bunch was formed and Cassidy continued on with his thieving ways. He is credited to being one of the first to break ground on the Outlaw Trail, which ran from Mexico to Montana and included different criminal hideouts and ranches.

On June 2, 1899 a group of armed men made a daring train robbery in the area of Wilcox, Wyoming. The robbers flagged down the unbeknownst train crew and boarded the locomotive that was part of a two-section train.

Once on the train, the robbers forced the train crew to cross a nearby bridge. After the last train car crossed the bridge, the bandits blew up the bridge by using dynamite, stranding the incoming second train on the other side.

Once they had succeeded in isolating the first section of the train, they demanded the express and mail workers to open up the doors. When the clerks refused, the robbers took the matter into their own hands and blew up the doors with explosives.

Once they moved aside the stunned crew, they used more dynamite to blow up the safe. The armed men were able to make off with around $30,000 before taking off into the mountains.

The notorious outlaws who committed this crime were that of the Wild Bunch. A large manhunt pursued after the robbery, with many lawmen taking part with no success. This famed robbery earned Butch Cassidy and his Wild Bunch a large amount of attention.

On September 18, 1877, the single largest robbery on the Union Pacific Railroad occurred. Sam Bass led his gang of six outlaws on this legendary heist near Big Springs, Nebraska. As the train was making its way from California, it made a pit stop in Nebraska at night at a remote water station. Bass and his crew took advantage of the situation, boarding the train to rob its safe. In the first safe, used for storing passenger's valuables, they found $450.

Wanting more, one of Bass’ gang members beat the attendant with the end of his pistol while interrogating him on how to open the main safe. Once Bass realized the attendant was telling the truth that he did not have the key, he called off his accomplice.

Believing they had come out with little cash, the outlaws decided to leave. However, on the way out, they noticed three wooden crates next to the main safe. These crates ended up containing gold bars that were each worth $20. Bass and his crew ended up escaping with $60,000, which is an equivalent to around an impressive $1.4 million, bringing the gang lots more fame.

On August 13, 1896, members of the Wild Bunch gang robbed the Bank of Montpelier in Montpelier, Idaho. The outlaws managed to rob the bank of gold and silver, getting away with anywhere between $5,000-$15,000.

Below: A famous photo with some of the members of the Wild Bunch, circa 1900. Butch Cassidy rode into town with fellow outlaws Elza Ray and Bob Meeks. The trio stopped for drinks before heading over to rob the bank. Cassidy and Ray forced the teller to gather all the money. They then proceeded to force the teller, along with all the customers, against the wall. The gang members then proceeded to collect anything of value from the customers and workers.

After they had finished, they told the captors to not go outside for 10 minutes. However, the teller immediately told the sheriff of the holdup. At the time, the sheriff did not have a horse, so he pursued the gang on a bicycle. With the robbers being on horseback, they were easily able to outrun the sheriff.

The Bank of Montpelier still stands today and tourists are able to come visit this historic site. This bank is home to one of the Wild Bunch’s largest heists.

This article was contributed by guest author Christine H. and is being used with permission.