A "stampede string" is a string used to hold a hat (commonly a cowboy hat but it can be any type of hat) on a person's head.

In the cowboy world stampede strings range from the plain but functional (for example, a simple string of leather) to the fancy and fashionable (braided leather or horsehair, colorful, etc.).

Below: A stampede string on a cowboy hat. 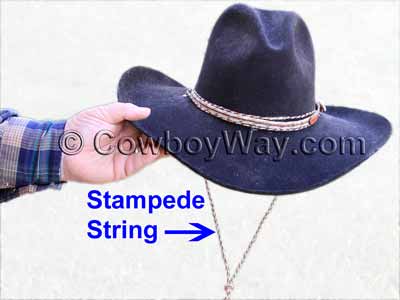 Below are stampede strings for sale on eBay, Etsy, and Amazon.

How Stampede Strings Attach To A Hat

Stampede strings typically attach to a hat in one of two common ways:

Since Cotter pins come in different styles it's important to mention that stampede strings use the "split pin" style of Cotter pin. This style of Cotter pin is made of flexible metal and is very simple: It is a single piece of half-round metal (rounded on one side but flat on the other) doubled over on itself with the flat sides touching. There is usually a small loop at the folded end. See the illustration below.

Below: Drawing of a Cotter pin. 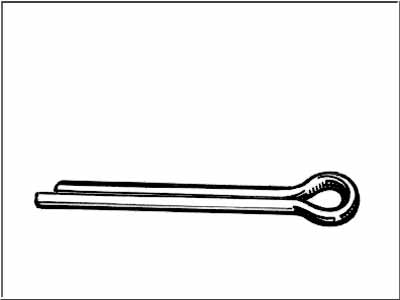 Video: Attaching a stampede string to a hat with Cotter pins.

Advantages and Disadvantages of Cotter Pins
Stampede strings that use Cotter pins do not have the loops of the loop style (described below) around the crown of the hat, and therefore don't interfere with the "look" of the crown or a hat band.

On the downside, in strong wind and/or fast riding, the Cotter pins can sometimes straighten back out and release the stampede string - and therefore your hat - from your head.

Below: Using loops, aka double loops, to secure a stampede string to a hat. From where the loops are shown in this photo they will be pulled upward more to make them larger, then passed over the crown of the hat. 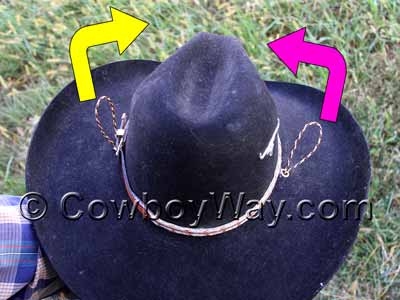 Advantages and Disadvantages of Loops
Stampede strings that use loops are more reliable for holding your hat on in strong wind and/or when riding fast.

On the downside, they may interfere with the "look" of a hat and/or a hat band, and they might be more expensive because there is more string needed to create the loops.

Do You Need To Put A Hole In Your Hat To Use A Stampede String?

Maybe. With the Cotter pin style of stampede string a hole is optional. You can either push the Cotter pin up through the hat by the sweatband as shown in the video above or you can make small holes in the hat brim. It's your choice, and both options have people that prefer them.

By the way, if you choose to make small holes you will almost certainly need to reinforce them with eyelets so the holes don't fray or grow. This is commonly done and isn't difficult.

With stampede strings that use loops you will need to make small holes in your hat so the loops of the string can pass through. The holes are very small and can easily be reinforced with eyelets to prevent fraying.

Stampede Strings: Good Things To Know Before You Buy